Eva Zeisel was continually intrigued by what she called her “playful search for beauty.” A person of delightfully defiant spirit, the designer was just beginning her career when she declared war on the fashionable avant-garde. “I didn’t accept the purism of modern design,” she said. “In my definition, if it gave beauty to the eye, it was beauty.”

Zeisel was born Eva Striker in Budapest in 1906. Her father ran a textile factory and her mother was an outspoken feminist and one of the first women to earn a doctorate at the University of Budapest. It was through her mother’s urging that Zeisel switched from studying painting at the Hungarian Royal Academy of Fine Arts to pursuing the more practical career of ceramist. She apprenticed herself to a potter at a porcelain factory, an unusual path for an educated woman at that time. Zeisel persisted, graduated to journeyman status and became the first woman admitted to the local pottery guild. It was during this time that her work took on the sensuous, flowing and biomorphic forms that would continue throughout her career.

In 1932, Zeisel moved to Russia, explaining, “It was curiosity that moved me. I wanted to see what was behind the mountain.” She found a job working for the Communist government as artistic director of the glass and ceramics industries. In May 1936, everything changed. “At 4am, there was a knock at the door, and so began a different life,” she recalled. Accused of plotting to assassinate Stalin, Zeisel was sent to prison for 16 months, 12 of which were in solitary confinement. The accusations were fabricated, and Zeisel never knew who was responsible for her release or how that joyous day came to be. “I hadn’t seen any colors for a year and a half,” said the designer.

Upon her release, she married Hans Zeisel. They lived in Vienna briefly, before the threat of Hitler made them leave for America. “I saw the Statue of Liberty, and my fears came down. It was a very touching reception,” said Zeisel of her October 1938 arrival. The next day she went to the magazine China and Glass and was immediately commissioned for ten ceramic miniatures for $100. She was also hired at New York’s Pratt Institute, where she became the first person to teach ceramics as industrial design for mass production, rather than handicraft. Zeisel’s work continued to gather acclaim, and in 1946, her all-white modern dinner service – a first by an American designer – was honored with an exhibition at MoMA. Her work is included in the permanent collections of museums worldwide, including MoMA and the Metropolitan Museum of Art in New York, and the Victoria & Albert Museum in London. In 2005, she was awarded the National Design Award for Lifetime Achievement by the Cooper Hewitt, Smithsonian Design Museum in New York. 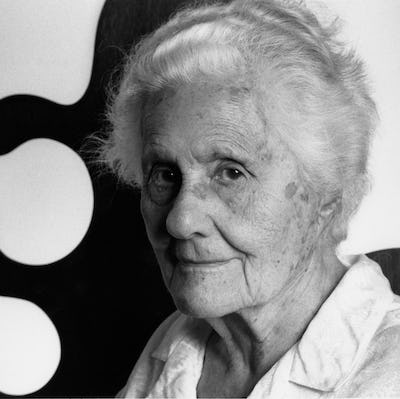 Modern is the poetry of a communicative line.